A TWO-MONTH-OLD SUFFERS FROM A VENTRICULAR SEPTAL DEFECT

Nuha Ayesha, two-month-old baby suffers from a Ventricular Septal Defect, Heart Failure, and total atypical pulmonary venous drainage (TAPVD). Doctors suggested that Nuha Ayesha undergo surgery due to her conditions, but the cost of the surgery, which is around RM 80,000, put too much burden for her parents to bear.

What else can her parents do but rely on the kindness of others to cover the cost of her surgery?

Who would have guessed that the excitement of expecting a newborn child could quickly turn the other way around in a blink of an eye? But that is exactly what happened to Nuha Ayesha’s parents.

Nuha Ayesha had low oxygen levels in her body shortly after birth and as a result, she had to be monitored by the doctors in a separate ward as her mother. 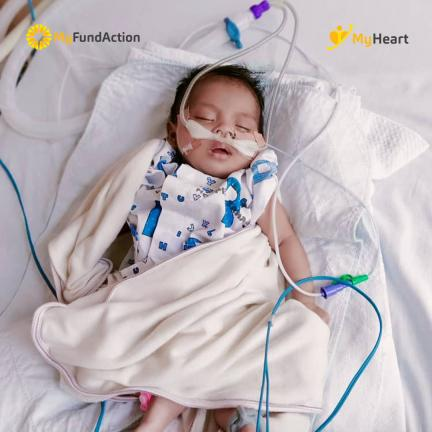 According to the doctor, Nuha’s heart beats irregularly, which results in making a sound. “This sound is considered normal for a newborn baby, but we should monitor her after a month in case anything unwanted happens to her,” said the doctor.

The doctor checked her heart after a month to see if the murmuring sound had gone away, but it had not. The doctor scheduled an appointment with Nuha to thoroughly examine her heart.

But her condition is getting worse day by day. Little Nuha starts to breathe rapidly and is always crying. Her parents were worried about her, so they decided to take her to the hospital ahead of her scheduled appointment.

The doctor kept an eye on her for several hours, and Nuha was admitted to a ward for three weeks. According to the doctor, Nuha requires immediate surgery at Gleneagles Hospital in Kuala Lumpur. 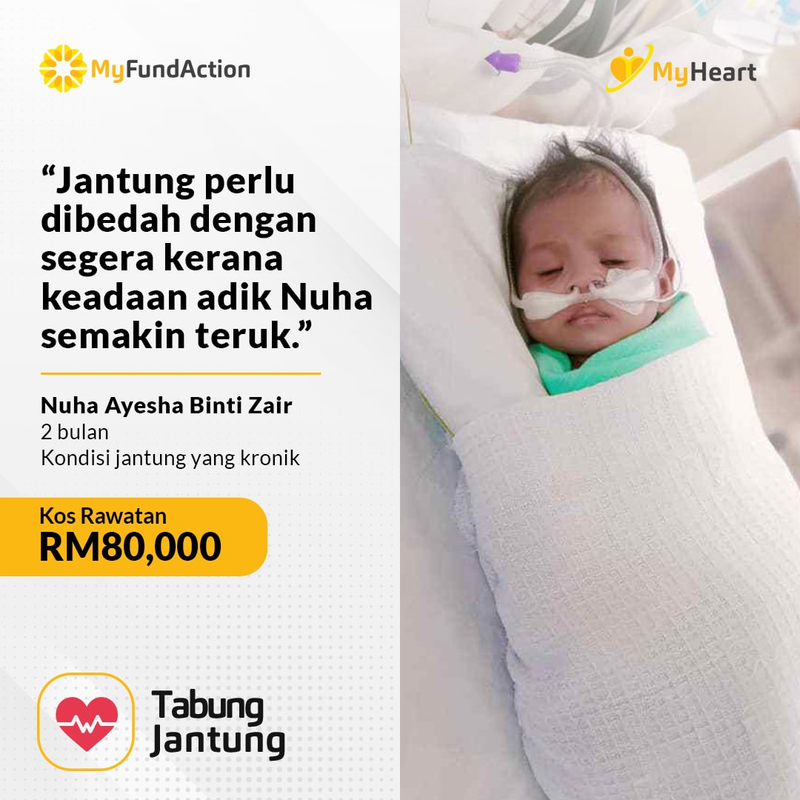 September 2, 2021 – Little Nuha undergoes surgery, which costs her family a total of RM 80,000. However, it has not yet been paid because her family cannot afford to pay such a large sum of money.

Mr. Zair(father), is a lorry driver, and Mrs. Yati(mother), is a kindergarten teacher. Even with their current income, they are unable to cover the cost of Nuha’s surgery.

What’s worse, due to the pandemic, neither of them has been able to work for the past two months. Mr. Zair’s business, as well as Mrs. Yati’s kindergarten had to close.

Furthermore, their family has not received any aid from the outside to help sustain their life

THEY NEED RM80,000 FOR THE SURGERY AND TREATMENT 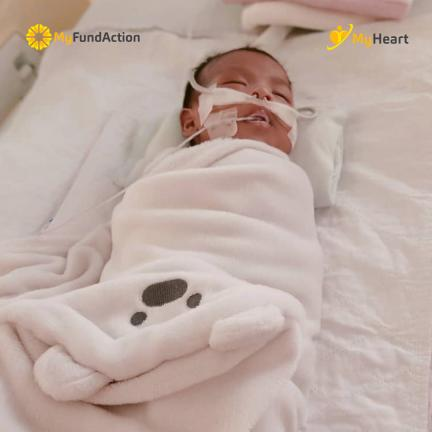 We from MyHeart, in collaboration with MyFundAction, have launched a fundraising campaign to help in-need patients just like Nuha and her family. We appreciate your support and cooperation in easing the burden of this family.

Help us fund the cost of Nuha Ayesha surgery and treatments. Together, we can bring a smile to her parent’s faces as they watch their daughter grow up like other children.

You may choose from the following packages that best suit your needs:

May Allah reward you abundantly for the rizq that you have shared with Little Nuha and other patients like her, thus providing them with a new ray of hope.

The story of Nuha Ayesha shared by MyHeart and MyFundAction is to ensure the success of the Heart Fund, thus supporting other heart disease patients like her. The funds raised will be used to meet Nuha Ayesha’s needs, with any surplus going to other patients in need. For the most up-to-date information, follow @MyHeartVolunteers on Facebook.

RM82,882 of RM80,000 raised
May Allah S.W.T rewards you [with] goodness. Support by sharing this campaign with others: