Struggle in Memorizing the Quran : Had to tear up the Quran into sheets because there was not enough Quran

THE REALITY OF AFRICAN MUSLIMS IN EDUCATION

Africa is well-known throughout the world as a country that has lagged behind other countries in all aspects compared to other developed countries.

Muslims in Africa are a minority in their own country. They lacked facilities, amenities, technology, and even educational opportunities.

According to Dr. Issa Malecela, a Muslim lecturer at the University of Morogoro, the suffering and bitter truths that the Muslim community faces in Africa are genuinely heartbreaking.

Who would have thought? They resemble Malaysia but 100 years in the past.

They learned to read, memorize, and write on a worn-out piece of wood or paper. Even their schools are old and in poor condition.

Despite this, they were able to send their students to Al-Azhar University, one of the best universities in the world. 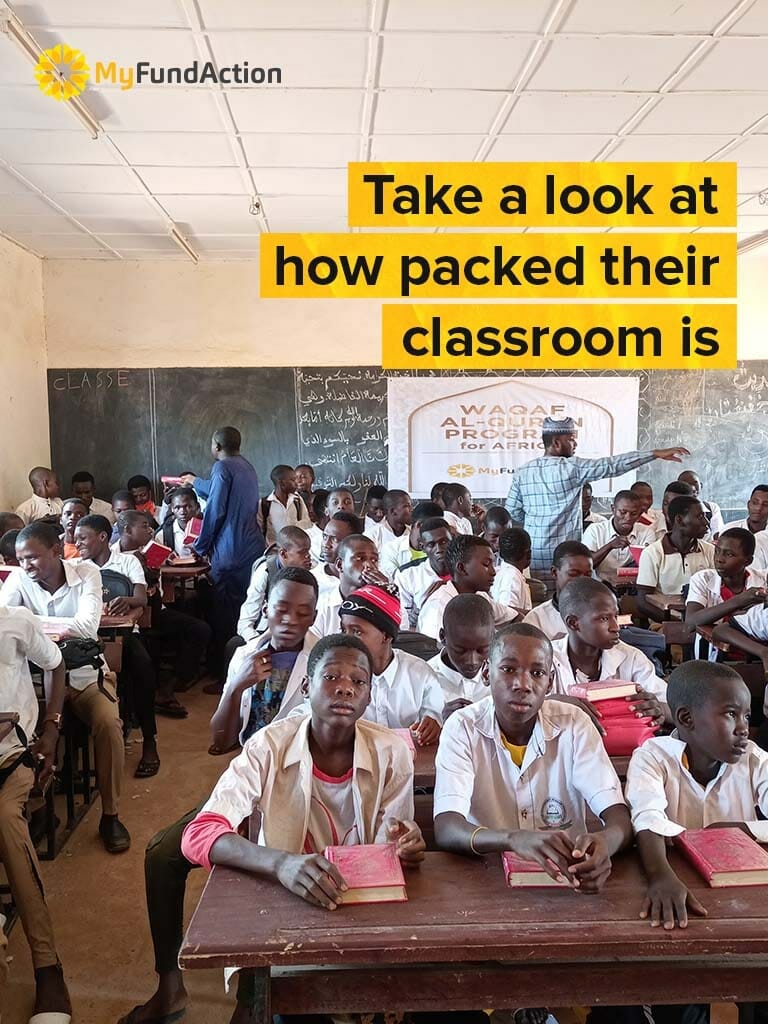 The Islamic primary school in Africa is so small and lacks the quality that it is not even recognized as a school.

Over 200 students can be seen crammed in a small classroom with no desks or exercise books.  Moreover, there is no such thing as an outdoor class as their class is already outside.

Only those students who are fortunate enough to learn under a roof can do so.

HAD TO SHARE ONE QURAN FOR EVERY TEN PEOPLE

Alhamdulillah, it is easy to get copy of Quran in our country. However, things are different in Africa, where they must share a single Quran with ten people.

Usually, they will take turns reading the Quran and quickly write down the words they read, on a wooden board, while memorizing the surah.

As a result, MyFundAction has taken the initiative to invite you to waqf alongside us in providing at least one Quran for our Muslim brothers in Africa.

WHY WAQF IN AFRICA?

As we all know, Africa is a country that suffers from various deficiencies. Moreover, the Muslim communities in Africa lack of printed Quran like Malaysia. Due to these deficiencies, we invite you to join hands with us and provide them, our Muslim brothers in Africa, with a Quran.

You can dedicate the intention of your waqf to:

The benefit of this waqf was demanded by Prophet Muhammad Peace be upon him as it is mentioned in his hadith:

Hadith narrated by Bukhari and Muslim. 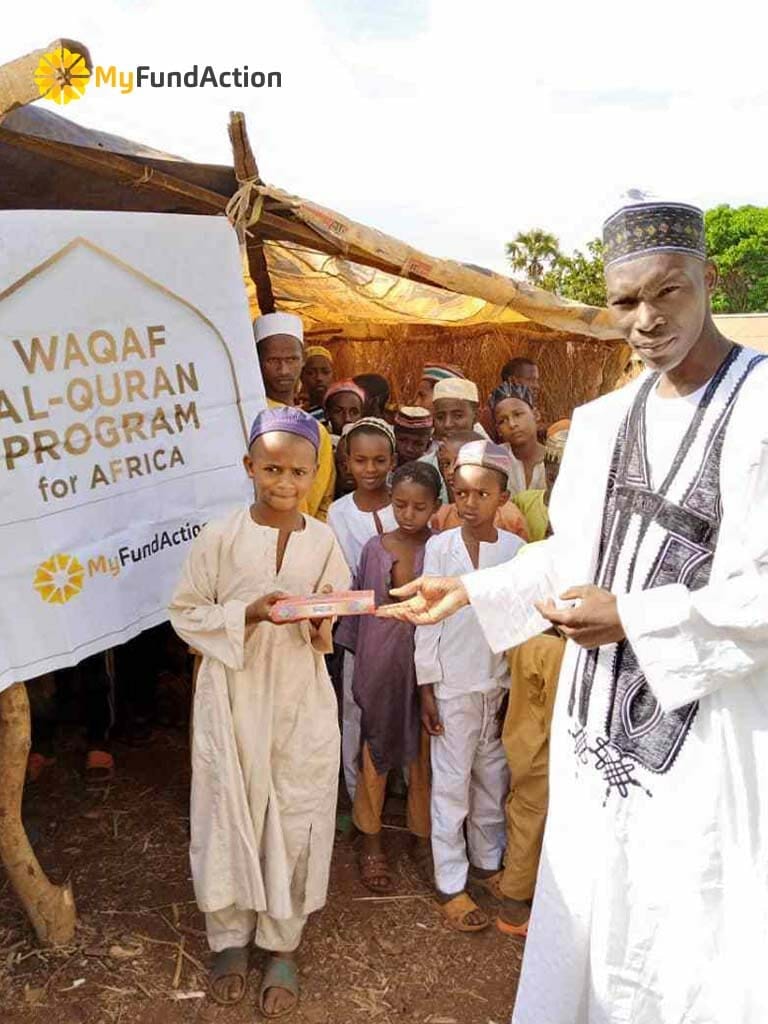 HOW WILL THE QURAN WAQF BE MANAGED?

We from MyFundAction will represent you in sending and distributing the Quran that you have waqf to targeted madrasah or schools in several areas in the African continent. There are six involved areas: Malawi, Chad, Kenya, Cameroon, Niger, and Ivory Coast.

MyFundAction will distribute 3,400 Al Quran every month, God willing, to 6 countries in Africa and we target and prioritize distribution in poor madrasah areas and in rural areas.

HOW TO JOIN THE WAQF?

You can choose from any waqf packages listed in the below that best suit your needs for as low as $15 USD per Quran.

Let’s assist our Muslim brothers and sisters in Africa in learning the Quran by providing or gifting them with a Quran, even if it is only a single copy!!

Even if we can’t teach them, we can still help them to learn and become hafiz. We will deliver and present the Quran that you have waqf to them on your behalf.

May Allah S.W.T shower us with an endless flow of rewards and grant us a share in the hereafter of the rizq that we have shared with them. In sha Allah. 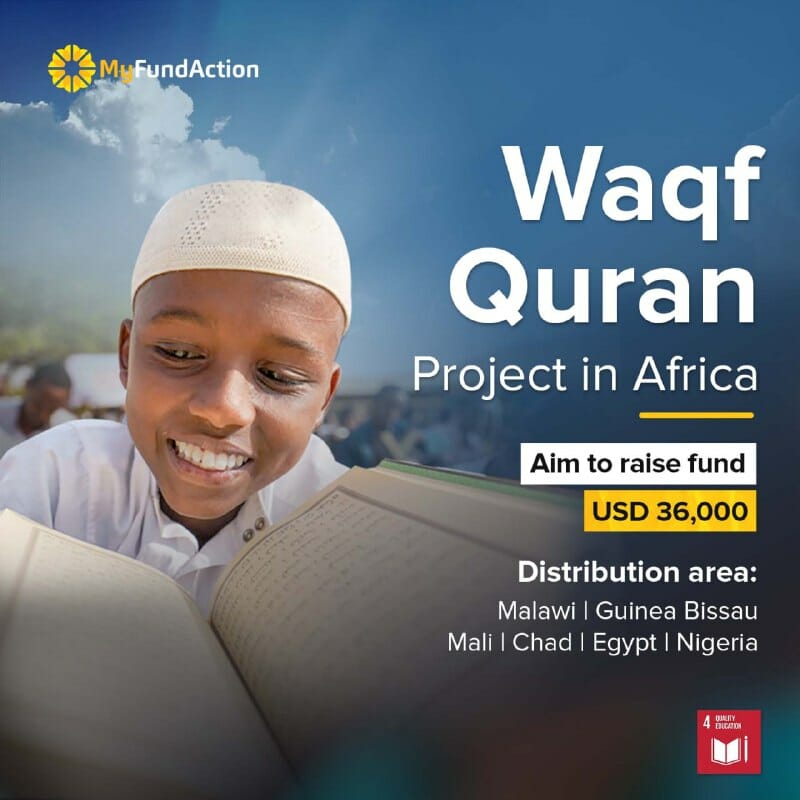